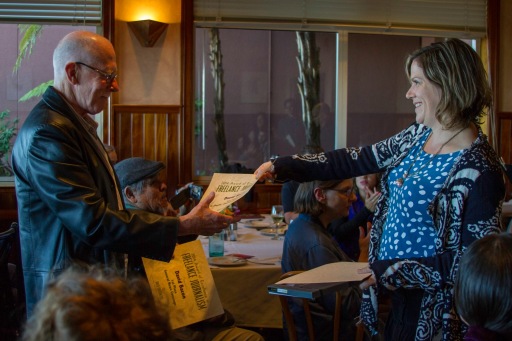 The Freelance Unit of the Pacific Media Workers Guild, part of the Newspaper Guild/CWA, sponsored the competition to laud freelancers working in a variety of media. Judges received 150 entries for a contest encompassing 17 categories, including photography, investigative reporting, political cartooning, sports coverage, and more. The competition was open to anyone in the region’s reach, which includes California and Hawaii, or any unit member elsewhere in the country so long as the work was published on a freelance basis during the calendar year 2013.

“We wanted to give recognition to freelancers,” said Rebecca Rosen Lum, President of the Guild and co-founder of the first Guild unit for independent journalists. “We’ve built up a bank of benefits ranging from press credentials to dental care, but this competition draws attention to the excellent work they produce. They deserve it.”

Guild Freelancers, launched in 2008 as the news industry collapse threw thousands out of work, represents journalists and independent writers working in all media, and advocates vigorously on their behalf. Its aim is to provide benefits, services, and educational programs for members, such as the popular Spring Training for Journalists, as the publishing industry evolves.

“The coming year is going to be the year of legislation,” Rosen Lum said in her welcoming remarks at the awards party, held at Delancey Street restaurant in San Francisco. “We are going to press lawmakers to sponsor bills that expand rights and protections for freelancers.”

The contest drew innovation as well as traditional reporting, with journalists submitting work in the form of a graphic novel and a board game. 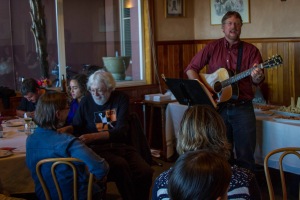 Guild colleagues in Washington, D.C., Chicago and St. Louis judged the entries. A grand prize named for the late, much-loved Bay Area journalist Raul Ramirez came with an honorarium of $300.

Longtime investigative reporter and photographer David Bacon won the award. Judges said Bacon’s work best exemplified  Ramirez’ commitment to excellence and his dedication to telling untold stories across linguistic, ethnic and cultural boundaries that give voice to the voiceless. His “Standoff in the Strawberry Fields”  took first place in the news reporting category.  Like Ramirez, Bacon focuses much of his attention on the hardships endured by farm workers.

“It’s a real honor when your own union recognizes what you do, because you are my brothers and sisters, and your opinion makes more difference to me than that of any editor that I ever had to fight with, or publisher that wouldn’t publish whatever it was that I wasn’t writing, so thank you very much,” said Bacon in his acceptance remarks at the June soiree.

The Chronicle’s Joe Garofoli emceed with the help of colleague and tunesmith Kevin Fagan, who had the audience howling during the program and dabbing at their eyes at the end with a sensitive paean to Ramirez.