Christopher Isaacs croons along with the rest of “Talkie” at Live 105’s “BFD” on June 6, 2016. Photo by Mitchell Walther

The sun beats down on the music lovers as they lounge on the grass. Cold beer and good weather entertain the crowd while the band finishes its sound check. “Check, check,” the lead singer mutters while ruffling his mop top of hair. Stress set aside in favor for memories of previous dingy bars and blistering festivals, he steps forward,

Talkie, a grassroots rock group from the working class neighborhoods of the East Bay, is about to start its set at the Shoreline Pavilion — a big step ahead along a path marked by hard work, artistic commitment and virtually no support from the traditional corporate players in the battered music business.

For many bands, touring across America and playing music festivals is the peak of success. Getting paid in pizza and making just enough to break even is good enough to keep the dream alive.

Band members of Talkie want to turn a dream into a business. Their methods and hard work are pioneering a business model separated from the music industry.  Brad Hagmann, his brother Matt Hagmann, Christopher Isaacs and Eric Martin have been bringing their unique style of rock to the Bay Area for the past two years

But playing music is the only thing that makes me feel fulfilled. I sell sofas when I’m not here.”

Matt Hagmann, left, and his brother Brad Hagmann jam on the local stage at “BFD” on June 6, 2016. Photo by Mitchell Walther

Getting people to come to shows is a challenge, as is getting people to hear your music. Talkie has taken a risk by forming its own promotion and record label, Milk Carton Media Group.

The start-up union seeks to bring projects together. Made up of mostly other band members and artists, Milk Carton Media Group allows workers in separate artistic industries to give each other a hand and fill roles that normally a record label would hire elsewhere for. The focus on the pure art form lends itself to a safe harbor of promotion.

Normally a record label will set up shows and radio debuts for bands. The branding and legitimacy of a record label’s backing can make or a break a band. To step away from the established method of the music industry requires quite a bit of passion, hard work, and luck.

Talkie calls up their own bars for shows, contacts artists for photoshoots and artwork, and uploads their own music to streaming sights. Applications like Spotify, Pandora, and even websites like PureVolume have allowed for a free range of access. Talkie still knows that live shows are still where new fans are made.

The BFD music festival on June 6, sponsored annually by radio station Live 105, was a breakthrough for Talkie, which was featured on the local stage with bands from around the Bay Area. Publicity, music and memories make for better payment than pizza for the band. The surging crowds in the hot sun also allow for a lifelong fan to find their music. With over seven million people living in the Bay Area, gaining a following of simply ten or twenty thousand can be enough, and can also be done.

Talkie used the opportunity to show how tightknit the group has become over the years. Playing its song “The Mountain,” the band let loose four-part harmonies and classic rock riffs with a skill that earned a standing ovation at BFD and demands for an encore.

“It’s really exciting. With all these bands here, the energy is just great,” guitarist Christopher Isaacs said as the next group, The Wombats, took the festival stage.

Talkie has been playing shows throughout the Bay Area, but sharing a lineup with national touring bands like The Offspring, Bad Religion, and Fitz and the Tantrums was a huge step for the band. 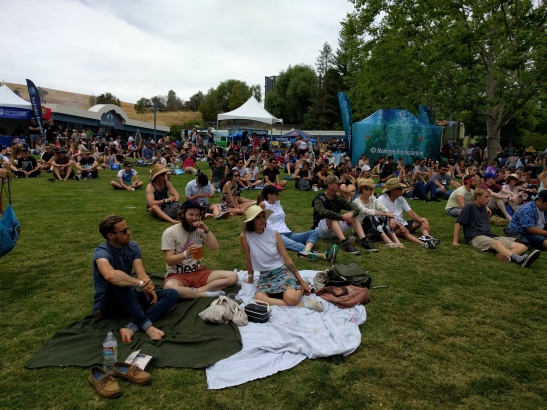 Talkie has been able to create a following, playing multiple shows at San Francisco venues like Bottom of the Hill and the DNA Lounge in the SOMA district. Opening for bigger bands and headlining with other local bands, Talkie is gaining ground show by show. The band just released its debut album, “Hablas.”

“Hablas” was the No.1 downloaded album on Noisetrade.com the week of its release. “It was really great because a lot of big records come out through Noisetrade,” Hagmann said. “In a digital age, it is easy to get your music to people, but hard to make them listen to it. There is simply too much to choose from.”

Jonny Gomez, lead singer of the local band “Bound by Vows,” has played a show or two with Talkie, and has taken note of the band’s passion. “A lot of bands play music because of the spotlight or because they’re good at it. Good or not, Talkie just really loves playing music. There’s a pure joy in the ability. They just love art and wants to share theirs with us.”

Hagmann smiles as the sun shines at “BFD.”

“It’s a hard thing to try and make noise on your own,” he said.

Talkie also got to play at the Summer Sweat Festival in Fresno on June 25.