By Shajia Abidi and Zak Cowan

The fire alarms blared as black smoke billowed out of the Graywood hotel and residents went door to door helping their neighbors to escape.

While Montoya scoured the burning building, other tenants of the single-room-occupancy hotel watched from across the street as flames shot out of the windows and destroyed their belongings.

The fire on June 18 left the hotel and several adjacent businesses, including a bar, a restaurant and a hardware store, in ruins. It displaced 58 people who are now searching for stable housing and waiting for word on when the Greywood will reopen.

Meanwhile, residents of the Mission and employees of Google have rallied to their aid, raising more than $50,000 and helped with the search for temporary housing.

Weeks after the disastrous fire, a fund-raising party at El Rio, a dance club and bar a few blocks north of the Graywood, raised more than $10,000, said Sana Saleem, who helped organize the event. “The idea behind the fundraiser is to bring the community together so that we can raise enough money so that these guys can have some money for food and shelter,” she said. 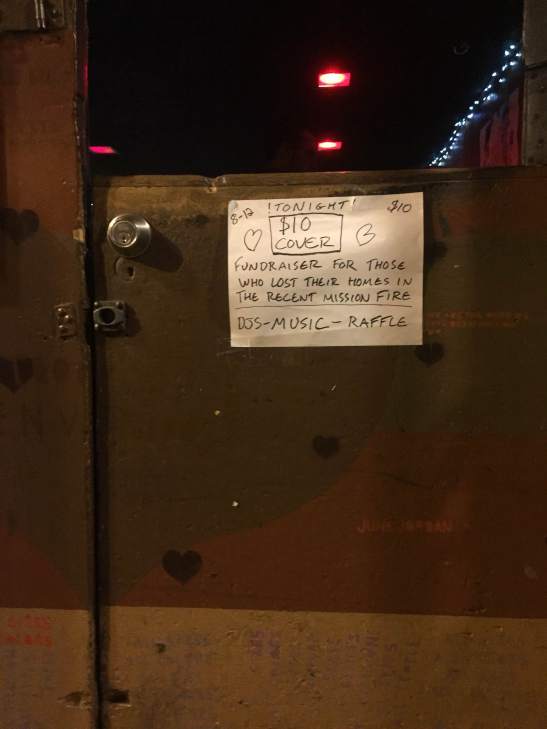 The entrance of El Rio bar in Mission.

Party goers were asked to donate $10, but no one was turned away for lack of cash, and many of the more than 300 people who packed the bar bought raffle tickets as well. “We were sort of overwhelmed with the response from people,” said Todd Lappin, an organizer of the event.

Katy Sullivan of Bernal Heights, who attended the fundraiser, said misfortune can happen to anyone and the community needs to help its victims.  “San Francisco is a very difficult place to start right now. If you have to start over, I don’t know if you could. It is really very hard right now,” she said.

More than 200 employees of Google contributed a total of $40,258 to a fund for the residents, and the Mission Economic Development Fund kicked in another $12,000. Organizers said that all of the money will be given to displaced residents of the Greywood and a nearby apartment building that also burned.

Other residents of the Mission are opening their apartments via Airbnb to people displaced by the fire “We need that [temporary place],” said Lappin. “That’s an important part, too, because the shelter only lasts for about a week.”

Airbnb’s Disaster Response and Relief Program is activated following a disaster. It triggers an email to nearby hosts asking them if they are willing to contribute.

Montoya has been told that it will take six to eight months to repair his apartment at the Greywood. The city has promised that he will get back the same room at the same rent — $850 a month, he said.

Until then, he said he is likely to be shuffled between different temporary solutions throughout the city. That process has already included a week at the Red Cross’s Salvation Army shelter in the Mission and a stint at a downtown SRO.

Other residents, Montoya said, are scattered among a number of SROs and are paying rents of $1000 a month and more with no help from the city.

As for Montoya, he is on two waiting lists for affordable housing and hopes to be chosen within six months. His income is limited: just $1,300 a month from Social Security and $32 a month in food stamps. All he and his fellow Greywood residents can do is “Wait until our number comes up.”