YIMBY activists gather in Oakland to say “Yes” to housing

If you’ve ever sat through a planning commission meeting you’ve probably met a YIMBY.

Those folks are activists with a simple platform: build more housing. YIMBYs – the acronym stands for Yes in My Back Yard – advocate for all types of housing: market-rate housing and subsidized affordable housing. If it houses people, they want more of it and fast. Their goal?  To make housing more accessible and affordable while reducing the displacement of residents caused by a soaring demand and a limited supply of existing housing.

With roots in San Francisco – land of the highest rents in the United States – the YIMBY phenomena is growing and it’s growing fast. From 2016’s New York Times column on local activist Sonja Trauss to the Atlantic’s June article From ‘Not in My Backyard’ to “Yes in My Backyard’, YIMBY is becoming a national sensation.

Sonja Trauss as she concludes her closing keynote speech at YIMBYtown on July 16 in Oakland, Calif. Photo by Garrett Bergthold/ Bay News Rising.

The movement returned to the soil from which it sprang in mid-July when over 150 housing activists from all over the country, as well as Canada and the United Kingdom, joined their Bay Area counterparts for YIMBYtown.

“We think it’s going to be huge in energizing people,” said Kieryn Darkwater of East Bay Forward on the first full day of the conference. “Everybody knows there’s a housing crisis but not everybody knows how to fix it.”

It was billed as a space for housing enthusiasts to share what’s working in their respective cities and what’s not. Sharing ideas, swapping tactics, building coalitions. All of it was at YIMBYtown, the second national conference of its kind.

“Last year it was more like what is YIMBY and this year it’s like we know YIMBY is these kinds of things. But what else can it be? So, it’s like expanding the definition,” said Laura Loe, Friday’s keynote speaker and longtime Seattle-based housing advocate.

During her keynote, she critiqued the lack of diversity within urbanism in general.

“Many of you will nod your heads when I tell you that urbanism is too white in general, too male and we need to make space for the voices of women and communities of color,” she said.

Loe then asked everybody in the audience to look around them. Her point was the relative lack of diversity in the room, with the majority being white males. 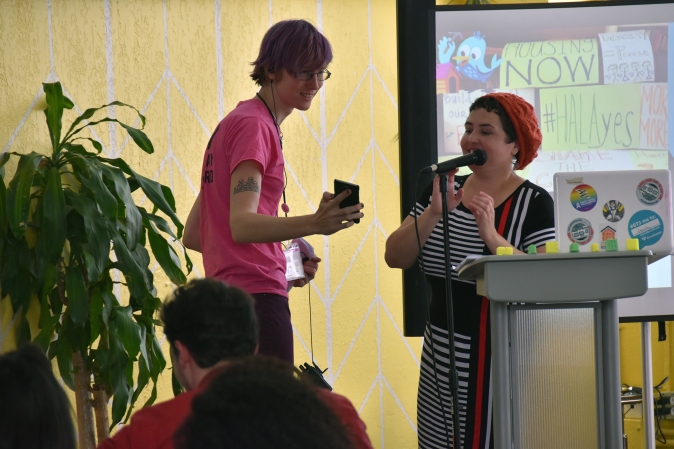 But opponents of the YIMBYs say their “build, baby, build” platform is overly simplistic.

One of the most outspoken is Peter Cohen, co-director of the Council of Community Housing Organizations (CCHO), whose organization includes 25 housing developers and tenet advocates in San Francisco.

Cohen said in an interview that YIMBYs ignore issues such as gentrification, displacement, and the role of market rate housing.

“Understanding the housing crisis in SF requires digging deeper into those issues and recognizing the complexities,” he said. “There are no easy solutions, and so the YIMBY answer of ‘just build more housing’ becomes a simplistic if not disingenuous agenda, irrespective of its clever marketing to the media and the public.”

Cohen isn’t alone. More than 20 protestors took to Broadway Street during the Saturday session chanting “not your back yard” to the tune of blaring drums. The protest was loud enough to rival YIMBYtown speakers giving workshops on the second story of the building.

A call to protest posted by Anti-Fascist Bay Area on indymedia.org.

On the last day of the conference, a man who flew over 5000 miles from London said he came here to learn and that his mission was a success.

“The Bay Area is way ahead of almost everybody else as far as I can see in mobilizing the YIMBY movement and organizing it,” said John Myers, 43, a full-time housing organizer at London YIMBY.

He and five of his friends started London YIMBY after seeing the housing shortage in London destroying the lives of people around him.

“We saw what was going on in San Francisco in the Bay Area and we thought there was a lot we could learn, so we decided to try it out in London,” he explained

Myers plans to return to London with new ways to spread pro-housing messages along with more specific knowledge on how to amend zoning regulations.

The United Kingdom has national zoning laws while the United States allows individual municipalities – in the Bay Area alone there are 101 – to decide their own zoning. Myers said the difference is irrelevant and the techniques he learned during the various panels and workshops will help his organizing back home.

“I’m always struck by the amazing, awesome energy and drive of people in the Bay Area so it’s always a pleasure to come here,” he said. “Another thing I learned is I will definitely come to the conference next year as well.”