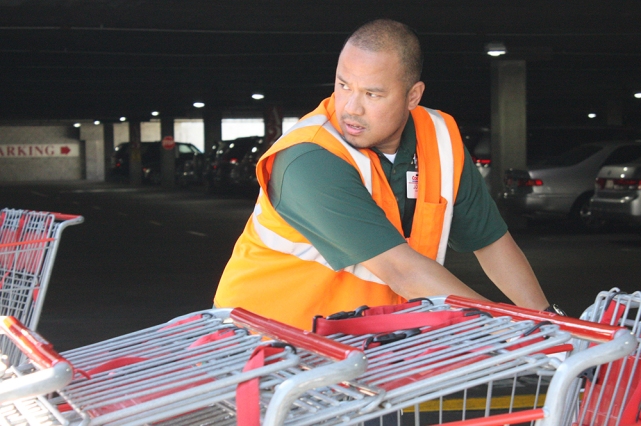 Today, more than a third of grocery workers rely on some kind of public assistance and one in five has trouble affording food.

But when Mike Henneberry started as a journeyman food clerk at Piedmont Grocery in 1983, “grocery store workers made as much as firemen,” he said.

That worries Henneberry, now a union representative for the United Food and Commercial Workers International Union, and his concerns are born out in a new study by the Food Labor Research Center at UC Berkeley.

Wages, benefits and working conditions for grocery store workers in California have declined sharply since 2000, the study reveals.

Report co-author Saru Jayaraman blames the declining wages and conditions partly on pressure from general merchandise stores like Walmart and Target, causing traditional unionized stores to pay lower wages and hire fewer workers. At the same time, competition—from Trader Joe’s, ethnic markets, high-end stores like Whole Foods and other specialty stores, most of which are non-union—has over-saturated the grocery market.

“One reason for the decline is the non-union part of the industry growing rapidly and causing a decline in union density, leading to downward pressure on union wages,” said Sierra Feldner-Shaw, communications director for the food union’s Western States Council.

Today’s grocery store workers not only earn lower wages, but they are also more likely to work part-time, are less likely to have health coverage through their employer and are at higher risk for stress and workplace dangers, the report says.

Daniel Coles has worked as a team leader in the grocery department of a Southern California Walmart for 21 years. His work week was recently cut from 40 to 32 hours a week. He was told passage of the Affordable Care Act forced the cuts, making it more expensive to hire full-time workers.

Walmart spokesman Cory Lundberg denied that the company does not hire full-time workers.

“Last year, we moved 75,000 people from part-time to full-time,” Lundberg said. Lundberg also denies that Walmart cut health benefits for its employees after the passage of the Affordable Care Act.

Coles, who supports his mother and sister, said he struggles to pay for basics like rent, gas and medical expenses. This year, he offered to work during Fourth of July to earn time-and-a-half holiday pay.

“Every little bit helps,” he said.

The Food Labor Research Center’s report describes the industry as one that is paying workers less and providing fewer good jobs than in the past.

Benner cited barcode technology as a major factor in lowering the skills needed to be a grocery cashier, which has led employers to place a lower value on the position and pay lower wages. Self-checkouts pose an even greater threat, and Benner predicts their use will grow over the next 10 years.

The demographics of grocery store workers have also changed, the report said.

Stores are more likely to hire young workers between 16 and 24, who are likely to be less skilled and lower paid.

The percentage of grocery store workers who are immigrants has also increased since 2000. Nearly 40 percent of the workers interviewed for the report said they were born outside the U.S.

But it doesn’t hold true that big-box stores must pay poorly to stay afloat.

Warehouse giant Costco has gone against the grain, paying competitive wages and benefits, offering more opportunities for advancement, and allowing some of its stores to be unionized by the Teamsters.

Costco’s share of the grocery market in California tops 13 percent, the largest of any single store.

“One choice is to pursue the Walmart model and another is to pursue the Costco model,” said Benner. “There are benefits of a union workforce even for employers, like  more stability and better trained workers.”

The expansion of the high-end Whole Foods Market has been more controversial  with grocery workers and unions. The company’s website claims Whole Foods pays competitive wages of around $36,000 a year.

However, according to a 2013 Fortune Magazine article, employees average only $27,000 a year.

All sources interviewed for this article said Whole Foods agitates aggressively against union organizing. According to Feldner-Shaw, a Whole Foods store has never been successfully organized.

Union leaders are trying to develop a strategy to preserve and create good jobs in the changing market. Some, like Henneberry, try to block the opening of non-union stores, whether they are big box stores or farmers’ markets.

“They take market share from unionized grocery stores, and that leads to store  closures,” Henneberry said. “It’s easier to block them than to try to organize a store.”

Araby takes a more nuanced approach. He believes that grocery unions need to “raise the floor” so both union and non-union workers get livable wages and benefits.

“If you can’t even pay your workers enough to afford the food in your store,” he said, “you have a problem.”