Either way, the city-owned 17-acre Balboa Reservoir is slated to add 680 to 1,245 housing units to the Ingleside neighborhood. Calling the project controversial belies the complexity of a three-sided fight as developers, housing advocates and angry neighbors strive to define its future.

“I’m pretty sure the community wants fewer units,” said Theodore Randolph, 33, a resident of the Excelsior District. “If a lot of them had their way they would want zero housing.”

After two years of community meetings, neighbors on June 10 flowed into a local high school cafeteria adjacent to the reservoir to learn what’s in store for the future of their neighborhood. Three developer teams chosen by the city to compete for the lucrative contract pitched their plans to a crowd of over 200 community members. Now was their chance to go head to head with each other under the scrutiny of the neighborhood residents and housing activists in audience. 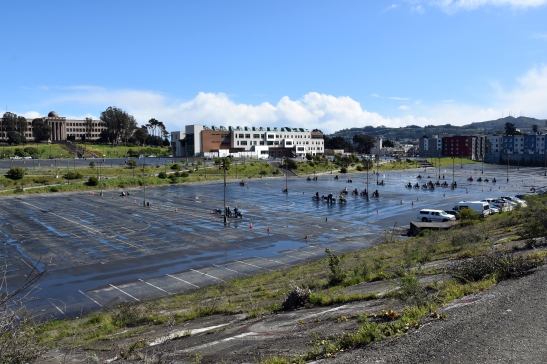 The Bay Area Motorcycle Training school conducts a course on July 2 at the Balboa Reservoir site, which is a parking lot for City College of San Francisco. Photo by Garrett Bergthold/Bay News Rising

The Balboa Reservoir dustup comes as similar fights over new housing rage across San Francisco, with neighbors crowding community meetings waving the flag of “not in my backyard.” From the “monster in the Mission,” the 395-unit 10-story development slated for 16th and Mission streets, over to the west side of the city, where a 150-unit senior living community in the Forest Hill neighborhood has been stymied due to neighborhood opposition.

With average rents near $3,600 and average home sales near $1.2 million, the cost of housing in San Francisco is among the highest in the U.S. Although most San Franciscans agree that increased demand and a chronic housing shortage are to blame, battles like these continue to be waged around the city.

The first team to present its proposal was AvalonBay Communities and Bridge Housing. It features:

Next up was Related California and Sares-Regis Group of Northern California, among a handful of other group members. That proposal calls for:

The last group to present its plan was Emerald Fund and Mercy Housing. Its plan includes:

A Planning Department employee discusses a proposal with a group of community members on June 10 as they prepare questions for the developers. Photo by Garrett Bergthold/Bay News Rising

After the presentations concluded, the wide variation in the number of units quickly became the focus of the meeting, with housing activists arguing for more units and neighbors arguing for fewer.

“We should have at least 1,100 units on this site. It’s a huge piece of property,” David said.

Since the project is near multiple Muni lines and less than a mile from the Balboa BART Station, David said that even the proposal with the highest number of units was low given the size of the site.

“If I were to wave my magic wand, I would think that 5,000 units would be a completely reasonable amount on 17 acres of land. It should be able to fit in this transit-friendly community,” he said.

But Aaron Goodman, member of the Balboa Park Station Community Advisory Committee, said that the proposals for new housing were simply too large.

The developers came equipped with necessary concessions for appeasing the neighbors, although some went farther than others.

William Witte, president and CEO of Related California, and his coalition of developers proposed the lowest unit count of the three groups – 680 units. He said the context of the surrounding neighborhoods was important to keep in mind.

“It’s not just a numbers game in this city, we know we have to work with the neighborhood,” said Witte. “If you propose something wildly out of context you’re likely to face resistance.”

Built in 1957, the reservoir is no longer in use and only holds occasional rain puddles. The western portion is now a parking lot with 1,000 parking spaces used primarily by City College students attending the campus across the street.

Marianne Mazzucco Thompson of the Office of Economic and Workforce Development said that the agency’s goal is to have a developer chosen by Labor Day and that community meetings will continue for several years as the project awaits its final approvals. 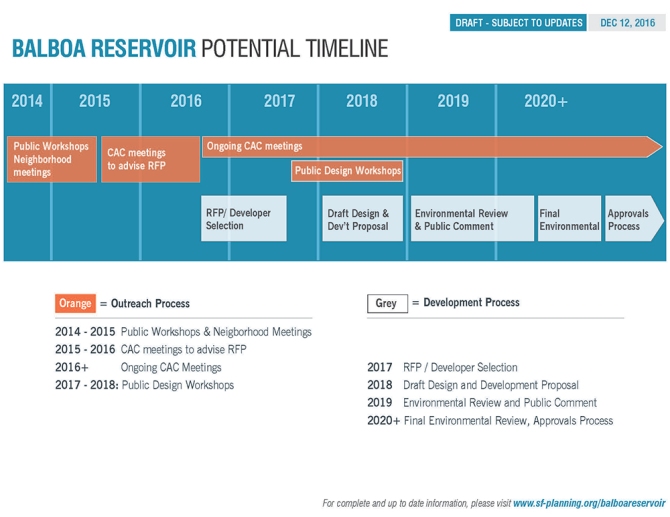 The complete timeline for the Balboa Reservoir project is shown in this San Francisco Plan
ning Department graphic.
.